Apaneca is a small village in the Department of Ahuachapán, is a clear demonstration of the beauty of the western part of El Salvador and its tourist potential. That is its course, whatever by Santa Ana (via Los Naranjos), Ahuachapán, Sonsonate and conducive way the traveler in a mood of incredible peace.

The name Apaneca comes from the words nahuatl APAN ‘River”and”winds”ECHECAT bone river winds, owes its foundation to Pedro de Alvarado in 1524. In the place were indigenous settlements prior to your arrival.

Located at 1,470 metres above sea level is the highest population of the nation. The occupations of the inhabitants of this village revolve primarily around the coffee, by it during the months of October and February there is commercial and industrial activities.

The visitor will undoubtedly find attractive in the Green Lagoon (in the crater of the Cerro de las Águilas) located at 1700 meters climbing lovers can live an exciting experience to climb the challenging Chichicastepeque as well as the lagoon of the nymphs another landscape that shows the beauty of this villa.

3 kilometers away from the village we find an extinct volcanic crater called Cuajusto pit where you can admire a beautiful view towards the West of the nation.

You can visit their quiet street in which you can observe various local artisans demonstrating their craft in wood such as pine, Cypress and cedar. We invite you to know this beautiful landscape of the western part of the nation that no doubt knowing it will return again.

In Apaneca enjoy a climate and cool environment which is combined with the tranquility of its streets and the kindness of its people so it is the ideal place to rest and relax.

His Church, as well as other buildings, is from the colonial period. It has hotels and restaurants as well as nurseries around the Villa in which the native flora can be seen.

An ecological path in which you visit two natural lagoons in the area, lagoon of the nymphs and the largest green lagoon, where you can see the hole in a crater and the forest there is Monte Tunco where there is a variety of wildlife. This hike lasts three hours and a half.

The area serves Indian chicken soup and meat of poultry aderazados with special seasonings, beans fried with “curd” (a type of very typical cheese of El Salvador), without forgetting the cup of coffee made from beans of the famous nearby crops on world markets.

How to reach Apaneca?

There are two ways to get to the town of Apaneca; one is via Ahuachapán, from San Salvador take the highway to Santa Ana and across this city (the second city of the country) you reach the city of Ahuachapán, from which deviates.

The other alternative is via Sonsonate doing a tour of 90 kilometers from San Salvador to Apaneca, passing through picturesque villages and Nahuizalco, Juayua; This route offers the traveler the opportunity to appreciate the coffee zone in El Salvador.

Apaneca is a very special place in El Salvador. We hope that you come to discover more than a landscape, a poem; more than a breeze, a song; more than a village, a feeling. 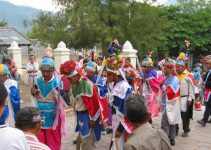